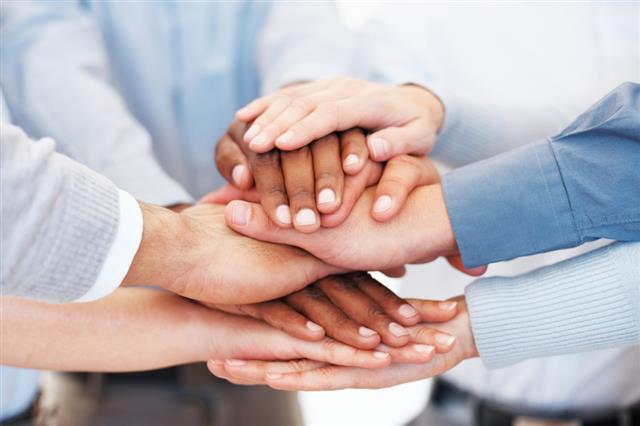 Communication, communication! Can we ever have enough of it. Common logic says that the more we communicate, the better we are as a team – more cohesion, more collaboration etc

Turns out, all of them found the entire conference overwhelming; they could not connect with anyone (which was one of the main reasons for attending the conference). As the noise level increases, people form smaller & smaller clusters – in some cases – as small as two / three people sticking to each other in order to avoid the chaos around them.

It was interesting to note that the larger the group, the lesser we communicate.

It’s like the difference between attending a large marriage gathering vs a small party. People often report back feeling more connected when they come back from a small party.

Perhaps that is the reason, why Amazon has a 2 – pizza rule – teams shouldn’t be larger than what 2 pizzas can feed.

The issue within teams is not that of team size, but the effort – the number of links you need to form to get the team to understand each other. Here’s a formula that organizational psychologist Richard Hackman has defined:

N = number of people in the team

The cost of coordinating, communicating, and relating with each other snowballs to such a degree that it lowers individual and team productivity.

And there is also the challenge of overconfidence. Research shows that people increasingly underestimate the task completion time as team size grows. 2 teams were asked to build the same lego set – a two – person team took 36 minutes, while a four – person team took 52 minutes to finish – 44% longer. The interesting fact is that the larger team was twice as over optimistic as the smaller team.

When a project is running behind schedule or you want something done faster, your reaction is to increase the team size – the more hands on deck, the faster the completion rate!

Now, it is time you used insights like these to break out of these fallacies. Stick to Jeff Bezos’s logic – the Two Pizza Team – you will be able to balance out the tendency to be over-confident and reduce the unnecessary communication links, in turn, completing your work faster.

How do you create your teams? How do you keep them feeling close-knit? Do share your comments.

And hang on till next week when we look at how teams can be equipped to take more effective decisions. There is a simple formula for that as well. Hold on to your curiosity till next week!

At Able Ventures, we help you in realizing your potential. We do this by “Engineering People Experience” Write in to us to know more about our assessments, development centers and training programs.